Eeeeppp!! I just noticed that somehow this got popped outside a LJ-cut! I am so sorry if anyone got spoiled!! I have no idea how it happened. ::hangs head in shame::

Ok... so... I think I kinda sorta love this episode because of Dean... but

ficliously   and i were talking about how we don't understand Sam in it which I have a problem with... I feel like I ordinarily understand the motives of both boys... but in this one, even when Dean felt a little out of step, I felt like I still understood why Dean did such and such a thing... but with Sam... I don't know... I will just have to refer to Sam as Harry Potter until he begins to feel like Sam again to me...

Here are my personal favorite bits from the episode.. and a few bits which annoyed me:

The episode opens and Supernatural has gone all Evil Dead. Sweet!! Couldn't those totally be Bruce Campbell's eyes? Of course, I knew it was Dean in under a heart beat... but still...

And then we see the grave site and I was all just... WTFingF?!  Because, well, the first question is, of course, why was Dean not given the ol' salt and burn and, secondly, if it was because Sam Harry wanted to go weep by his grave, why the fuck is his grave in the middle of a field, in the middle of fucking no where?!  And why does his grave marker look to be super weathered and old?  How long has he been down there, and why does he still look so pretty?  Isn't he supposed to be all corpsified?

Just as I was wondering why Dean is clearly buried in the middle of an explosion... every question I had got completely chucked from my brain because I caught a glimpse of... BOWLEGS!!!

Shouldn't this read Jared Ackles and Jensen Padalecki?  Hasn't rumor of their marriage been officially established by TV Guide Network?  I mean... they are living together now...

He looks way too much like a lost little boy to me here.  I think we should establish a charity called Give Dean Winchester Soup.

I love these little details Show throws out there... like the date on the newspaper being the date the episode first aired in the US. Dean looks like he is going to kill someone for allowing him to be dead for - counts fingers - four months.

Ok, the hand print... the hand print is one of the coolest fucking things I have seen in anything in a long, long time.  I like how Dean is all Wow, my stomach is no longer torn to ribbons and I have such nice muscles? Hi nipples!  Hi tattoo!!  Wait... what is this I feel on my shoulder?!  HOLY SHIT!!!!!!!!!!!!  I am curious to know if hand print will be there forever... or if hand print will go away. I hope it stays because it is made of win.  Soooo creepy!!

Harry's number being disconnected broke my heart... as did Bobby hanging up on him... but then Dean caught sight of the classic car out the window and I knew everything would be just fine.

And then Bobby reacted the exact way I expected him to... right down to throwing the holy water in his face and that made me happy... because Jim Beaver is always for the win.  I was amused that he tried to kill him not once... but twice. Ha. 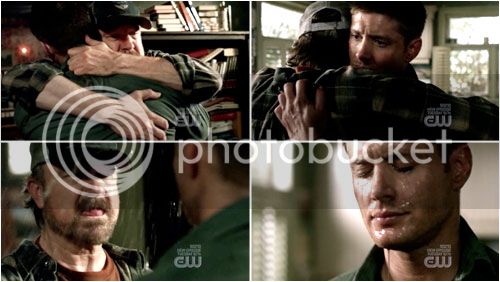 I know I already mentioned this, but I really do love the little details... and that Harry was using the name Wedge Antilles.  Ha ha ha.  Star Wars geeeeeekkkk!!!!  I would personally not go with a mobile phone company who had a website like that... but I kinda sorta want to make it into a LJ layout...

And then the whole episode began to go pear shaped for me...

Ok, firstly, who the fuck is this woman with Harry?  She reminds me, visually, a bit of a dear old friend of mine... but she rubs me entirely the wrong way.  And what is it with Harry and women in boy briefs? Has he become Dean... or is she somehow helping him?  Either way.. I hate her.  Shouldn't Harry be, like, all OCD and insane with grief?

And then this broke my heart because Dean looks so relieved and happy to see Harry and clearly just wants to be swept up in the best kiss of his life.. but Harry goes and tries to kill him. Yeah... I suppose having lived through Mystery Spot with the trickster would make me a bit uncertain... but Bobby is there with him... shouldn't we trust Bobby's judgement?  Bobby has never failed us.  He's like Gandalf or Obi Wan... and this is our dead lover brother who we probably tried to sell our soul to save... possibly did sell our soul to save... and we died and got brought back ourselves, so shouldn't we assume this could happen to Dean as well?

See, this still seems off kilter to me.  I mean, Dean is like... melting into Harry.  He looks like he will never move again if he avoid it... but Harry... Harry just cannot seem to accept his brother is back...  And then Bobby looks like he is going to cry and I cried....

OMFG!!  Guys!!!!!!!!  Sam has been wearing Dean's necklace this whole time!!  It's like when you wear your dead spouse's wedding right.... Ok, he can officially be called Sam again... that felt Samish to me.

Dean!! It will be ok!  Harry is gone and Sam is back... together you can make everything better... was anyone else wondering how much this whole being buried alive thing is going to fuck up Dean?

Speaking of things which will probably come back to haunt us.. anyone want to take a guess that Jesse will?  What type of crazy person or psychic do we think Jesse is going to be?

This cracked me up.  Ha ha ha.  I love how pissed off Dean looks.  Ha!  And how amused Sam is.  On that note... what is wrong with this woman?  If you just meet someone who was in Hell for the past four months and had somehow been dragged back to the land of the living, wouldn't you be googling the Give Dean Winchester Soup foundation instead of suggesting hanky panky once the seance is done?

And check out Sam's face when he learns about the hand print which Dean obviously was planning to tell him about at a different time...

And then everything in Show got gross again... and you all know how much I love gross!!!  I love Dean sneaking a peek during the seance.  So classically Dean!

Damn it!!  Sam really is still Harry Potter.  When did Harry get the crazy new skill of being able to make demons vomit themselves out of the body they are possessing?  That is pretty cool.  You all need to admit that that is cool!!!  However, here is what I do not understand about this bit... if this thing which they both saw, and which Dean and Harry are trying to track down, is going to be the death of them all... why is she still alive?  Shouldn't they have been killed/exorcized/whatever? 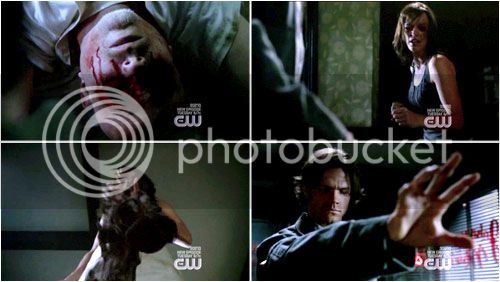 FUCK YOU, KRIPKE!  Why can't Ruby just go away?!  I haaaaaaaaaaatttttttttteeeeeeeeeeee Ruby!!  I was so hopeful.  So, so hopeful.  If we were going to keep someone from last season, why couldn't it be Bela?!!!  I am posting this photos as a comparison that the chick in Harry's room is the same actress who is later in the diner since both my sister and BFF swore it was a different actress/person... but no, Harry has seemingly been shaking up with Ruby.... which is plain old gross on so many levels.  This is what I mean about not understanding Harry and what is going on in his brain.

And then....
Then we cut to Dean and Bobby... Bobby who looks like he is about to shit a brick and Dean who looks bored out of his skull... and along comes our magical mystery Hell saver... Castiel who is none other than an angel of God.... I love the angle.  Love him. LOVE HIM!!  I kind of liked the Godless world Kripke previously had... but the actor who is the angle is SO beyond cool!  I hope this same actor continues to play him and he is not swapped from body to body because this guy is made of serious win.

Clearly God is aware Sam has gone all Harry Potter - he is up on his reading - and can see that Harry is going down a dark path at the hand of Ruby and knows that Wincest is the only thing which can bring Harry out of his dark hole and help him to transform into our little Sammy.
Tags: our squee will be impenetrable, spn ep review, spnorgasm, supernatural
Subscribe